September 09, 2007
Even though you know it will take 4,000 itty bitty pieces, you decide to make 100 rose blocks anyway. The 4,000 pieces will be enough for just the border...the 8 inches that will hang down over the mattress on all sides. I have no idea what the main quilt pattern will be, but I am sure something will come to me as I piece along block after block after block after block...........

I must be either a masochist or an escapee from the local psychiatric ward.

My sister is nurse Ratched in the local psyc ward, so if I get admitted, I will at least be among family.

Do you all know who nurse Ratched was? Remember 'One Flew over the Cuckoo's Nest" with Jack Nicholson? She was his caring nurse. LOL. From some of the stories my sister tells it's not a fun place to be a nurse. She gets spit on, punched at, and worse. She doesn't take any cr*p, though. She may be the baby of the family, but she's a tough cookie! 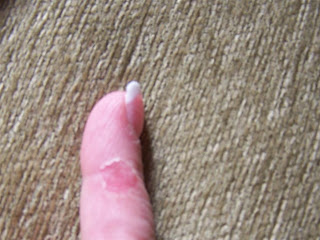 OK, this is not quilting, but it is at least crafty.  I also lost a good deal of  finger skin on this project,

so I am really feeling the need to show off my new denim rag wreath.

It all began when I was in the basement and saw an old metal wreath form that I have had for years.  My many mornings of Pinterest surfing caused a sudden urge to make a denim rag wreath.

We quilters have a ginormous stash of fabric, so it only took a few extra steps in the basement for me to get an arm load of old denim jean fabric to begin the project.  My eye spotted an old flannel bed sheet that I no longer use. Since all denim would be too dull for me, I grabbed the coordinating sheet .  I cut everything into 7 to 9-inch strips (I found 9-inch to work best) and


began to tie them to the wire wreath frame.

This is not a quick project.

You can expect to tie for at least three hours.  After about two hours, I realized my … 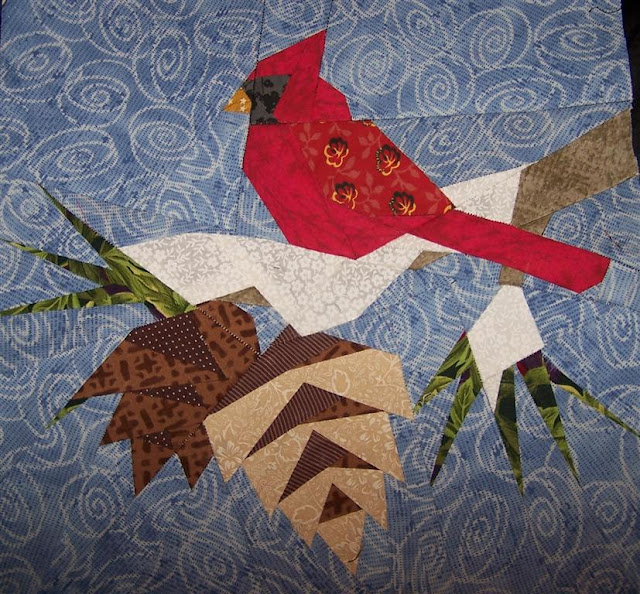 I just started it last night and it's already finished -- I did not time it, but I would guess it took a good three hours total. I was pretty happy with this. It seemed like I had no big boo boos.  Then as I was removing the back paper, I found two mistakes.  I could just feel my face fall as I spotted a sewing line (and then a second one) that had no stitches--ARRRRRGGGGGG. That is not a good feeling when you have a block completed.


I am missing one green leaf and the dark pine cone top left edge should have been medium brown, not that dark brown. Now I will have to make another one to get it right.


The mistakes are not really that major. The beauty of pine branches is that they are all different, right? :)

I have no idea what I will end up doing with it.  Right now it's going on the stack of the other winter/Christmas blocks I finished the past few weeks.  This block finishes at 12 x 12 inches. It might make a nice winter pillow for a sofa.

This is another one of the five… 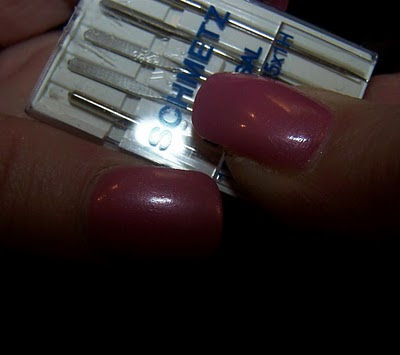 I pull and pull, push and push, squeeze and squeeze, and I can almost NEVER get these things opened!

Is there some trick? I know the nails make it a bit more difficult, but I can hand quilt with these nails, so I certainly should be able to open a box of needles!

Here is what I always have to resort to:

breaking the plastic with a screwdriver. The needles fly all over the place!

Surely there is a better way. Please, if you know, enlighten me! I am about to stop buying these just because I can't get them opened. I think they need to redesign the case.

Here are Cathy's detailed directions in case anyone else is struggling like I was:

OK, on your new package of needles.
1. Turn it sideways so the "Z" in Schmetz is pointing at your belly button.
2. Lick your thumb and index finger of your right hand(unless you have na…